I’m gone on vaca. And with all the pre departure craziness, trying to finish the schedule for the co-op, I didn’t cook very many original meals. I have no Sunday Sup for you today.

Instead I suggest you check out these websites. They are my fave food blogs.

How Sweet It Is

This is another recipe with uncertain origins. I found it on my recipe shelf, scribbled on a note card. I am sure I got it somewhere sometime. It’s one of the hubs fave things. But even he recognizes that more than a couple of times a year is too much.

Start a large pot of water to boil.

Peel and cube 3 large russet potatoes. Throw them in the water as you go even if it’s not boiling. Keep an eye on the pot though, you only want to par boil, 2-3 minutes at most.

The potatoes probably need draining now. Drain them and toss them into the buttered dish.

Now that the leeks are soft, turn the heat down to halfway to LO, add 2 tbsp flour. If you’re going gluten free I like tapioca starch for this recipe, it gives a nice thick sauce. Stir until incorporated and a little cooked, 2-3 minutes.

Turn the heat back to medium and slowly add 2 cups half and half while stirring. Once incorporated you can change to stirring occasionally. Bring to a boil, slightly lower heat to maintain a simmer for 5 minutes. Stir occasionally.

Sorry about the pic, my FIL was here and the boys totally dug in. My husband was like, “It’s a good thing you made so much steak or I would have totally eaten all the potato stuff.” 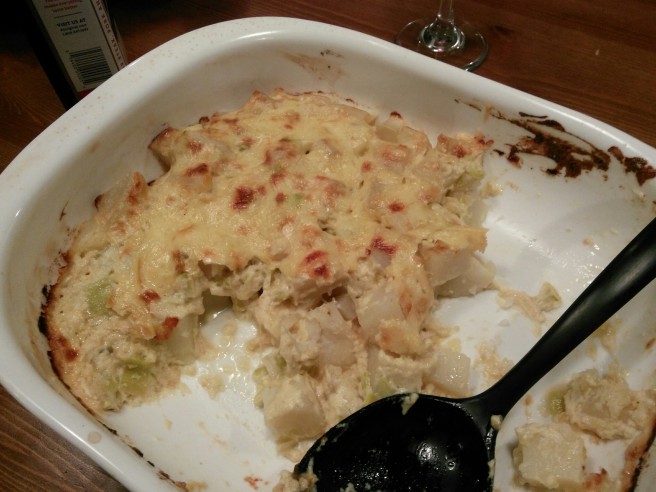