Just a quick note as I am away road tripping with the kiddo.

The Rone award finalists were announced today: I did not make the cut.

I simply don’t have the fan base. This isn’t news but more the standard state of affairs. I have no idea how to help that along.

Howdy, howdy. It’s Wednesday. Do you know what that means? You have a couple of days left to vote for Ostrich Mentality in the Suspense/Thriller category for a RONE award. Aren’t you excited you didn’t miss it?

What? You want to know why you should vote for me? Did you not get a free download last week and already read this fabulous bit of entertainment? sigh ok.

and here’s a bit from the review in case you don’t want to click over and read the whole thing.

An interesting take on a time period in the not so distant past, “Ostrich Mentality” is an eye-opening tale with a colorful cast. Despite being 316 pages, the reader will fly through this fast-paced novel, immersed in its intelligent suspense. The fact that this novel is not far from the truth gives the story a sinister feel. Overall, “Ostrich Mentality” is an engaging work of espionage and biological warfare.

Best Selling Author Jenifer Ruff had this to say “Packed with insightful intrigue from the first page to the last, Ostrich Mentality has me convinced the author is truly an international spy.  If you like intelligent and sharp-witted espionage novels, you’re going to love this book!”

Did I convince you yet? Don’t make me use my international spy skills on you.

Okay, okay, how about this? I’ll make Ostrich Mentality free again today. Go download and check it out. Then head over to the RONE Suspense/Thriller category and click the little button next to my name.

My hands are shaking so hard I keep hitting the wrong keys. LOL.

This is the FIRST time I have been recognized for my work outside my loving friends and family. The FIRST time my work was held up by someone who makes their living judging books and who said this shit is good.

Every one says it’s a thrill just to be nominated. And it is. Beyond thrilling.

But imagine if I won?

To win, I need to get through to the finals. And that rests entirely on you, readers, voting for me. 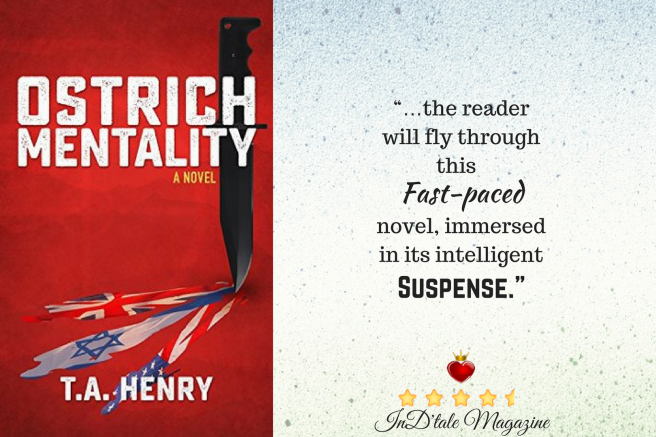 I got rather a lot of downloads from the 48 hour free run I did earlier this week. Especially considering I hadn’t bought marketing for it. My friends pestered their friends. Let’s hope that turns into votes next week. Pretty please with sugar on top.

I haven’t actually written new words in over a week. The kiddo was on spring break last week which usually means lots of play dates and special events where I can squeeze in quality time with my laptop. Only….he came down with a cold on day 1.

I finished the bathroom demolition though. And created another 200 gallons of yard waste to be taken away. I’m hanging dry wall now and still creating yard waste. I think I’ll be planting new bits in the yard next week.

In the mean time, many an idea is percolating in the brain for the second novel in my mystery series. So I can get right back to writing on that now that the kiddo is better.

Voting for RONE Suspense/Thriller Novels opens next Monday. Here’s the link to the voting page. Yes, I know there’s no little radio buttons. Those will be active next week.

What’s going on in your writing world?

Yup. You read that right. Ostrich Mentality got nominated for a RONE award. And because I like to share when something good happens, for the next 48 hours you can download Ostrich Mentality from Amazon for free. Yup. FREE

Give it read and then pop over to www.indtale.com between April 23rd and April 29th to vote for Ostrich Mentality in the Suspense/Thriller category.

A high professional review got me into this competition but votes from readers will get me to the finals!

Did you ever see that moderately heinous/moderately hilarious Mark Wahlberg movie, The Big Hit? Late nineties. Studios were just figuring out that a big name did not make a big hit on it’s own anymore. LOL.

Anyway…near the start of the movie a minor character is trying to commit seppuku. He’s all decked out in his best, on his knees, signing the traditional lament, sword held a loft …

and the phone keeps ringing.

You can see that thoughts on his face. What the f? I’m trying to kill myself here and you people won’t leave me alone.

I’ve been on the verge of quitting writing a few times now.

But I found a writing group that loved me gently through the process.

Then, my booked bombed.

I was so depressed.

But I was teaching a writing class on how to write and publish in a year and I couldn’t quit on my happy, eager students.

Then the feedback from Beta on my second book was epic bad.

But a trashy little short I wrote got accepted into a horror anthology with several bigger name writers. And the anthology did really well.

So I worked like mad to release my second book shortly after that to capitalize on that momentum.

I decided this year was it. I’m releasing three books. If they all do badly – I’m done. It’s too heart breaking.

And now I got nominated for an indie and small pub award. What?

A while back I applied for a review from a professional review publication. A few friends had used them before and considered them not a scam. I heard nothing for like 8 months. I assumed A) they hated it. B) it was so bad they declined to even send it out to reviewers. C) well you can imagine.

So um today I found out I am up for an award from them for how highly I was reviewed.

The review is here.

But I’ll cut and paste to save you some effort:

An interesting take on a time period in the not so distant past, “Ostrich Mentality” is an eye-opening tale with a colorful cast. Despite being 316 pages, the reader will fly through this fast-paced novel, immersed in its intelligent suspense. The fact that this novel is not far from the truth gives the story a sinister feel. The reader feels invested and engrossed in Galatea and her journey. It is also refreshing to read a clever tale where advanced technology is very different from what we know today without the story losing its credibility and development. Overall, “Ostrich Mentality” is an engaging work of espionage and biological warfare. Some may find the topic boring and tedious, but fans of speculative fiction should make sure to add it to their to be read list!

Ostrich Mentality is up for a RONE Award. Reader voting will take place April 23rd to April 29th for my category, Suspense/Thriller.

Vote at www.indtale.com for Ostrich Mentality April 23 to April 29th.

If I get through this round it goes to a panel of industry professional who will pick the winner in each category.

I’m kind of flummoxed. But what the heck…

Vote at www.indtale.com for Ostrich Mentality April 23 to April 29th.