It’s officially Spring according to the calendar. We topped fifty degrees. I shaved my legs and broke out my spring skirts. Ahhh, spring. Just two weeks ago I was complaining I was soooo cold, this winter had been so harsh, why did I go to Europe in the dead of winter instead of somewhere warm? But now all is forgotten, because the sun shown on my pale as snow legs yesterday. smiles

I don’t know where I got the original recipe for this. It’s scribbled on a half sheet of note paper in my binder of recipes scribbled on bits of this and that.

This is a very forgiving recipe. Double it, half it. Change the amount of each veg, that’s all good. It will change the taste a bit but still be tasty.

Start oven preheating to 400. Get out a large glass baking dish, I use a 9X18. I suppose it doesn’t have to be glass as long as it is non reactive and large enough to hold everything without letting the sauce run everywhere.

Chop the woody ends off one pound asparagus. Cut into 1 inch pieces. Toss into the dish.

Cut the bright white and dark green portions off 2 medium leeks. Slice into half moons. Rinse well. Allow to drain.

Cut three handfuls of grape tomatoes in half. I like mixed heirloom ones. Add to the dish.

Toss in 2 handfuls of golden raisins. 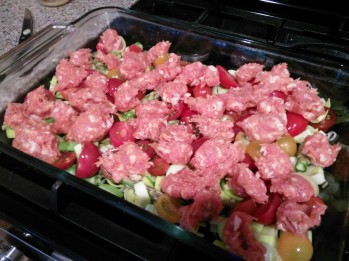 Crumble up 1 pound of chicken Italian sausage, sweet or hot, your call. You can also use pork sausage if that floats your boat.

Mix 1/4 c olive oil, 1/2 c good balsamic, a tsp of minced garlic in a bowl until all incorporated. Pour over the veg. Stir everything around. Pop it in the oven. Set timer for 15 minutes.

Stir when the timer goes off, put it back in, and start your water for your pasta. You can use whatever pasta you like. I used edamame pasta on this one. And a low amount as I try to minimize carbs. Zoodles would also work but this dish will be a bit soupy as zoodles don’t absorb 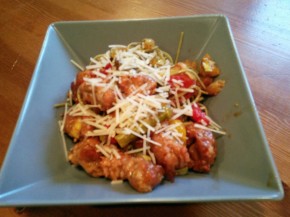 By the time your pasta is done, 15-20 minutes later, your veg are done as well. Drain the pasta and add to the veg pan. Mix all together. Serve with parm.