Every so often an author blesses me with an early copy of their latest book and then agrees to a short interview to amuse my readers. Tomorrow marks the launch of Allison Maruska‘s latest novel, The Seventh Seed.

Seed is the standalone sequel to The Fourth Descendant, and despite not having read it, I was not at all lost or confused. Nor was I drowning in back story. In fact, I was rather intrigued to read the previous book and learn more about the characters who have clearly been up to some interesting things.

Seed is a well done conspiracy book. The historian in me has no problem believing it’s coming. After all similar things have happened more than once before. I don’t want to give away too much. Let’s just say many people in Seed have taken to heart Margaret Mead’s famous quote, “Never doubt that a small group of thoughtful, committed citizens can change the world; indeed, it’s the only thing that ever has.” It makes for compelling reading. I quickly became invested in the welfare of the characters. 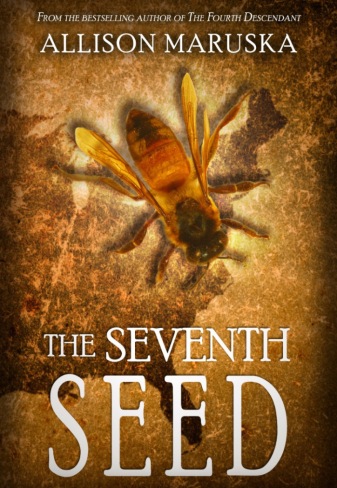 A little about The Seventh Seed:
(Summary provided by author)

While researching beehive demise across the country, Javier stumbles onto a breakthrough – a virus carried by bugs that insecticides can’t eradicate. The discovery explains a string of human illnesses and deaths, and it means a vaccine is possible. But instead of his bosses celebrating his achievement, they try to kill him.

After evading capture, Javier meets Liz, a widow who works at a homeless shelter. Together, they become fugitives, and in searching for a vaccine, they discover an intricate chain of secrets that leads to the most powerful entities in the country.

To break the chain and free the people, Javier and Liz must fight an impossible battle. While winning means relief from decades of manipulation and oppression, losing would result in more deaths than the virus ever threatened.

So Allison, I have to say the future you paint in The Seventh Seed, is pretty scary. Being lied to with no choice but to pretend to go along or pay the price. That might top my list.  What story scares you?

Of all stories? The Shining does the best job. The topiaries moving around was SUPER creepy.

Oh god. When I was in high school my boyfriend talked me into watching that with a bunch of our friends, now I never ever dabbled in horror before that movie, ever. That was my introduction. I think I almost peed my pants, twice. Ok, that was an over-share , clears throat, moving on.

Which word / phrase do you find yourself always over-using and having to edit out?

It’s a moving target. “For a moment” had a good run, but after I killed it there was too much throat clearing. Now there’s too much going on with eyes.
Clears throat. Sometimes you legitimately need to clear your throat a lot, like when you’ve just told your entire reading public you almost peed your pants watching The Shinning. LOL. Oh man, enough about me, let’s talk about you. If you could be any one of your favourite characters (your own or others you’ve read) for one day, who and why?
So I read a book a while back called His Majesty’s Dragon. It takes place during the Napoleonic Wars, only all of the armies have air forces comprised of dragons. The MC is Lawrence, and he unwittingly becomes the handler of a Chinese dragon that speaks eloquently and likes to be read to. I want to be Lawrence because he has a pet dragon, basically. Preferably on a day when they aren’t in battle.
Wow. Sounds like a very cool book. I’ll be sure to check that out, after I read the rest of yours of course. LOL. We’re about out of time here. Which means – cocktails! If you had a cocktail named after you, what would it be called and what would be in it? Would you drink it?
The Anxious Grammarian. LOL And probably not. I bet it tastes like advil and tears.
Um, no. I find it impossible to believe a woman who wants a dragon as a pet would have a boring cocktail. Let’s call it the Elegant Dragon. And I bet it tastes of Cinnamon tea and vodka. Bottoms up!
Grab a copy of The Seventh Sign and your favourite cocktail. Enjoy a Tuesday night, at least you aren’t taking on a corrupt government in your spare time.

13 thoughts on “Book Review and Interview: The Seventh Seed”